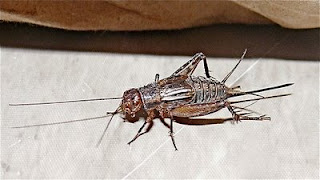 A department store recently used this fact -- Crickets have ears on their knees! -- to peak interest in an email ad. I thought the claim sounded bogus (can you just picture a little cricket with tiny ears sticking out of its legs?), so I took to the Internet to investigate.

It turns out the ad is correct (my apologies to Kohl's). The University of Arizona Center for Insect Science Education Outreach states in their Cricket Information sheet that when the male chirps, "the resulting chirping sound is picked up by the female's ears on her front legs."

Still, I figured that these "ears" would be simple structures, nothing that would even come close to rivaling the complexity of the human ear. But again, I was mistaken. The book Artificial Neural Networks: Biological Inspirations – ICANN 2005 includes a paper entitled "New Ears for a Robot Cricket". The authors, Torben-Nielsen, Webb & Reeve, state that a cricket has "at least four body openings" used in hearing and describes the cricket's auditory system in this way:

[It] consists of two ear drums ... located on the forelegs and connected through a system of tracheal tubes. One extra sound opening on each side of the cricket body ... is also connected to the tracheal tubes.

In short, the cricket's auditory system is nothing less than amazing. The female cricket uses all of this auditory information to track down the location of the chirping male to mate with him.

Male crickets have an equally complex system for "singing", the noise they generate when rubbing their wings together. As scientist Axel Michelsen explains in the fascinating paper "The Tuned Cricket" (News Physiol Sci 13: 32-38, 1998), "a scraper on one wing hits a series of cuticular teeth on the other". (That's the male cricket's instrument!) The male cricket's wing then acts as a "loudspeaker" to amplify the sound so that the female can hear it. The song is optimized to account for the fact that crickets are low to the ground and the resulting frequency of the vibration ensures that the noise can be picked up and heard by the female.

According to Professor L. C. Miall in House, Garden and Field: A Collection of Short Nature Studies, both male and female crickets can hear:

The male cricket hears the sound which he produces, and the female hears the call of the male.

But only male crickets can sing, a fact I learned from the Minnesota Pollution Control Agency. They have a nice page about crickets that includes a coloring sheet, the formula for predicting the temperature based upon the number of cricket chirps in a given amount of time, and a recipe for (eeew!) chocolate-covered crickets.

If bugs are your thing, be sure you drop by The Center for Insect Science Education Outreach. Their website has advice for Using Live Insects in Elementary Classrooms for Early Lessons in Life, with lesson plans, information sheets about various insects (including crickets), and tips for caring and raising the little critters.


Photo credit: Larry Page, through a Creative Commons Attribution 2.0 Generic license.
Posted by jublke at 10:40 AM

I am Shelley from Los Angeles,California, I want to testify on how i got cured from tinnitus, I have suffered from ringing ears since the year 2011 with so mush pain,that i have to spend so mush money getting pain relief in the hospital, and I have visited several doctor ,but all to no avail, my world was gradually coming to an end because of the buzzing sound in my right ears, until i saw a post in a health forum about a herbal Dr Williams who use herbal portion in curing people from different kind of diseases including tinnitus, at first i doubted if it we be able to cure me, but i decided to give it a try, when i contacted this herbal doctor via his email, he prepared a herbal portion and sent it to me via courier service, when i received this herbal medicine, he gave me step by step instructions on how to apply it, when i applied it as instructed, i was completely free from tinnitus just for 1 months of usage,i we recommend this to all my friend family in the world today who still suffering from tinnitus you can contact him through his email on drwilliams098675@gmail.com for help.

I am sophie from Canada, I once suffered from a terrible and Chronic tinnitus ,in 2016, the doctor told me it has no permanent cure i was given medications to slow down its progress, i constantly felt my health was deteriorating as i constantly go out of breath,and this noise was really terrible especially when am sleeping, i have this constant ringing in my ears for about 8 months, this was really a terrible noise ,on thin one day that i was going through the internet,and i came across a post of Mrs Kate on how she was been cured from tinnitus through dr Williams herbal product, I contacted this herbal doctor via his email and explain everything to him and make purchase of his product,few days later he sent me the herbal medicine through courier service, when i received the herbal medicine i used it for 3 weeks as prescribed and i was totally cured of tinnitus within those week of usage,on thin now i have not hear anything ringing in my ears.if you need his help you can Contact this herbal doctor via his email drwilliams098675@gmail.com for help