Welcome to the 139th edition of the Carnival of Space, your portal to the blogosphere's most interesting astronomy posts of the week. I'm delighted to be in your company.

Since I'm new here, let me introduce myself. I blog about family-friendly science here at Mama Joules and astronomy is a favorite topic in our family. I recently interviewed Tracy, of Tiny Mantras, about her experiences raising a four-year-old astronomer. You can read her wonderful responses in Meet Jupiter's Mother and Meet Jupiter's Mother (Part 2). As you can see, my own four-year-old, Little Brother, has been working on his book of Space Words.

Speaking of terminology used in astronomy, Stephen of Steve's Astro Corner has defined basic terms used when describing how planets orbit the sun. Kim at Chandra Blog gets more technical by sharing five differences between white dwarfs and neutron stars.

And white dwarfs are getting some press this week! Mike, of Simostronomy, shares the heartening story of how amateur astronomers alerted the world to a rare stellar eruption known as U Scorpii. He writes, "Observers around the planet will now be observing this remarkable system intensely for the next few months trying to unlock the mysteries of white dwarfs, interacting binaries, accretion and the progenitors of Type IA supernovae."

Interacting with the public can take researchers to some interesting places. What do you get when you combine ancient legends and Google Earth? Steve of Cheap Astronomy interviews an astronomer who used this unusual method to find a new meteor impact crater. You can listen to the interview as a podcast or read the transcript (this is a .pdf file). (I didn't know you could get a degree in Aboriginal astronomy - fascinating!)

As for spacecraft, this week was a sad one for fans of the Mars Exploration Rovers. Efforts to free Spirit, still stuck in the Martian sand with two of six wheels broken, have been called off. However, as Stu at Cumbrian Sky points out, we should not count Spirit out, because Spirit is not dead. We wish her well as she hunkers down to survive the harsh Martian winter, and we hope that she is able to endure as a now-stationary science station.

In honor of Spirit, why not enter Alice's competition for artists at Alice's Astro Info. Draw, photoshop, or paint your rendition of Spirit stuck at Troy, send it over to Alice, and your artwork will grace the Space Place Bulletin Board at Pacific Science Center. What a wonderful way to celebrate the beginning of Spirit’s new life as a station!

As you are visualizing Spirit on Mars, let your mind wander beyond the edge of our solar system, where Ian at Astroblog gives us a wonderful rendition of the sun as seen from other planets. (I feel very small now, Ian!)

After drifting among the stars, take in James Cameron's blockbuster new movie Avatar, which is poised to break the all-time U.S box office record later this week. But before you go, drop by Next Big Future, where Brian examines the Valkyrie Antimatter Propulsion Rocket used in the movie and explores the science propelling this spaceship.

How long will it be before we go back into space ourselves? Is President Obama going to axe Ares and Constellation? Has funding for this new rocket system dried up? How will this affect future space travel? Phil tackles this rumor and its possible implications at Bad Astronomy.

And what does the rest of this year have in store for us? Have we begun a new Global Space Age? Bruce at 21st Century Waves shares ten space trends for 2010. (2015 looks like a good year!)

What if we open up cislunar space (the space between the Earth and the moon) to entrepreneurs? Check out these unique business ideas from Ken at Out of the Cradle. Is a 3-D gravitometric map of the inner Solar system in our future?

How are we going to keep up with the energy consumption needs of future civilizations? Brian at Next Big Future examines what it would take to power a yottawatt civilization. (A yottawatt is 1024 watts - a blindingly large number. In 2006, total human power consumption worldwide was about 16 terawatts; a terawatt is 1012 watts.) It's hard for me to fathom, but as Brian concludes, "As noted by the definitions, capturing and using 0.3% of the energy from the sun enables a yottawatt civilization." Personally, though, I was most intrigued by Brian's off-handed comment about "using Jupiter for nuclear fusion fuel." Now that's thinking big!

One thing we know for certain, this is the year of launches at Kentucky Space, with three confirmed launch dates set for 2010. As Wayne shares, "Our suborbital 'ADAMASat' mission is slated for February 24 from Wallops. Discovery (STS-131) will lift off with the first of three 'Nanoracks' bound for the ISS in March. Our free orbiting craft, KySat-1, was just publicly confirmed as a secondary on NASA's 'Glory' mission in November." Safe travels, Kentucky Space!

On a sober note, C.C. at TheSpacewriter's Ramblings remembers pioneers of space exploration, noting that three terrible disasters are recalled this week: the Apollo 1 fire, the Challenger disaster, and the loss of the space shuttle Columbia. As she so eloquently says, let's "salute the Apollo, Challenger, and Columbia crews who gave their all so we could explore. Let’s do them the honor of pushing forward and continuing our push to space regardless of the challenges we face at the moment." 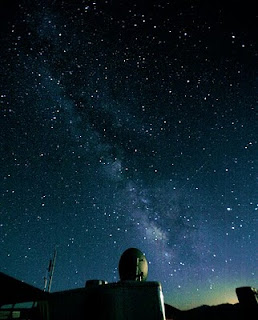 That brings us to the close of issue #139. Thanks for stopping by! If you'd like to check out previous issues of the Carnival of Space or if you would like to host or submit to this blog carnival in the future, please visit Universe Today.

Thanks to everyone for contributing such diverse and interesting posts to this week's Carnival of Space. If you have any corrections or changes for me to make, let me know and I'll fix them as soon as I can. Thanks!

Someone pass the space wine!

You're hosting the CoS! Yay!
Great job compiling the links!
(Pardon my overuse of exclamation points!)

Glad to get to know Mama Joules.

"By all means, check out the Carnival and all its fine offerings this week. But take a minute to get to know Mama Joules."

Tracy, nice to see you again! It was fun putting this together but WOW were there some diverse topics! (See, I overuse exclamation points, too, I wasn't even trying to do that!)

Mike, thanks for the nice comments. I liked your blog -- I'll have to stop by there again soon. I'm a big proponent of citizen science.

Yottawatt. I like that. I'm going to make it a point to use it in a sentence before the day is out. (Although it kinda sounds like a term devised by Doc Brown and Elaine Benes.) Great job on the Carnival, I'm looking forward to checking out these links...I'm always searching for new material for my own little space blog too!

In general, nice carnival entries. But it's sad to see that the "21st Century Waves" support Climate Change denial...

I've come to realize that the Twilight Series, which was targeted towards younger teen aged girls when first written, should be looked at as a group of movies in much the same way. I've seen better and I've seen worse, but this movie isn't half as bad as some people think. It is not an academy award winner in anyway, but it does what it set out to do, and for that it gets a pass from me.

Hi Jason: Lights in the Dark is a great site! I like your layout. Hadn't yet seen that xkcd comic about the Mars rover ... it make me choke up!

Bjoern: I was surprised to see that too from 21st Century Waves, although I did enjoy the diversity of viewpoints in this carnival. Thanks for stopping by.