We are all scientists

In the US, today is Martin Luther King Jr. Day and I've been thinking about equality. I just arrived home from attending Science Online 2010, a science blogging and web communication conference, where I sat in on several talks about citizen science. In one, while discussing the lack of STEM (science, technology, engineering & math) funding for adult science literacy programs, a participant said,

This is tragic. Not everyone is going to work in a lab doing research, but everyone can be a scientist. We are all entitled to explore the world through science - it's our birthright. My husband, Itinerant Cryptographer, said it well:

"Everyone should have the opportunity to explore science as far as their interests and abilities can take them."

But in this country, many adults no longer participate in discussions about science. In turn, scientists feel like the general public isn't listening anymore. Both sides are growing more polarized, with the scientists amping up their insistence and the non-scientists becoming more resistant. As someone who has sat on both sides of the table -- as a working scientist and now a stay-at-home mom -- I can see why some people have completely opted out of this discussion.

On the plus side, practicing scientists are often generous with their time. They love to be asked about their work. Many share their knowledge freely with those who are interested. Frankly, I find most scientists to be nice folks when you get to know them. (And I love ecologists. I know I am biased here, but people who want to save the planet tend to be kind.)

But scientists can be an intimidating lot to the uninitiated. Some researchers are so steeped in their work that they can't imagine why someone would see things differently. They don't hesitate to tell you so -- this is their life's work and they know it well. But this passionate viewpoint can sound aggrandizing, or worse, insulting. The non-scientist (or non-practicing stay-at-home mom science blogger) might leave the conversation feeling frustrated, angry, and unheard. As John Morley once said, "You have not converted a man because you have silenced him."

Where does this leave us? It's terrible for the future of science. Scientists need to get the word out about their research. Non-scientists need to hear the message, but their concerns must be addressed by the scientific community. Nothing is going to improve if we don't all start listening to one another.

In order for this to happen, though, everyone needs to feel welcome at the table of science. Whether you are a four-year-old stargazer or a distinguished Nobel Laureate, your concerns and ideas matter. You are a part of this conversation.

If you felt unwelcome in scientific discussions before, let this be your ticket in. Please come back to the table of science. We need you here. All of our futures depend upon it. 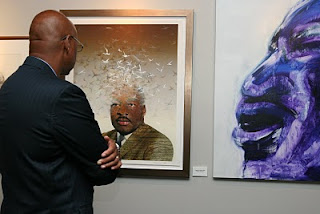 "Faith is taking the first step, even when you don't see the whole staircase."
-- Dr. Martin Luther King, Jr.

Hi, I'm popping in from Scientia Pro Publica, and I'd just like to say you are 100% right! There has to be some way to interest the "lay person" in science again. Something a bit more educational than the simple -albeit beautiful- nature documentaries. Where's the next Space Race to awaken man's curiosity?

As a scientist who'd still like to make a living as such (trying to write up a thesis, argh!), thanks for bringing this up!

Hello
Thanks for this great Op-ed like piece that I just crossed upon. It is crisp and very pungent. I am myself a working scientist(Not an ecologist though, just an astrophysicist) doing a lot of outreach and I much appreciated the message. Scientists need to be communicating ... and humble. The public needs to get involved in science discussions have his voice heard.